I know this is a blog about Diabetes, but I woke up this morning feeling so grateful for my little girl. She is AMAZING! I just love her so much!
I will make the diabetes connection in this rambling post. Hang on. 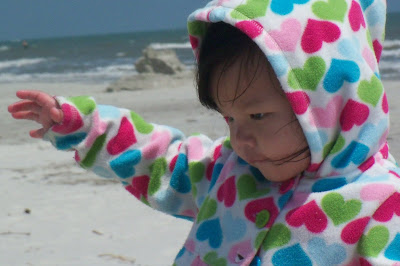 All week long my baby girl has been having brand new adventures. She embraces life with a gusto! The first day we arrived, we strolled down to the beach. She squealed with delight and ran in many circles, as if she did not know what to do with all her excitement.
All week long she has been saying...." I LUB IT!"
The other phrase she keeps repeating is "Kank you, Mama. Kank you, Dadda." (thank you)
She says this when I change her diaper, buckle her seat belt, tie her shoes, put on her helmet, open the door for her, give her food...........for everything.
Melt my heart. 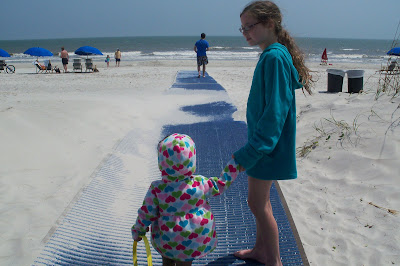 I have never had a two year old who displayed so much gratefulness.
I'm tearing up now thinking about it.
When I realize that we are so blessed to have one another, I am the grateful one. 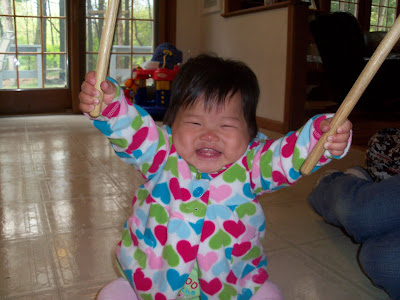 When we first started the adoption process, and even throughout the 5 year wait, some people were skeptical. Some thought we already had too many children. Some thought she might be sick or too difficult to raise. Some worried she would be emotionally damaged from her stay in the orphanage. Some worried we couldn't afford it. Most of these people were well-meaning and concerned for the welfare of our family.
But I knew we were supposed to do this.
Even after Zac was diagnosed and I was a little paranoid people would think we were foolish and irresponsible for taking on so much responsibility. But I yearned for her.
Call it a God thing. 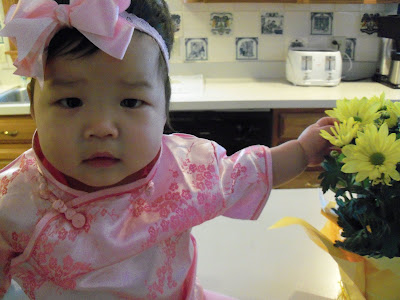 Now on to Zac and Diabetes.
When Zac was first diagnosed, he went through a mild depression. As I have mentioned in previous posts, he struggled to make sense of his new reality. It took about a year of navigating these waters before he seemed better to me.
During that time, I contemplated the possibility of getting a dog for our family. I really thought a dog would be very therapeutic for him. He could have a companion to love, who would love him unconditionally. But our lifestyle didn't really allow for a pet. My husband likes to pick up and go on impulse. 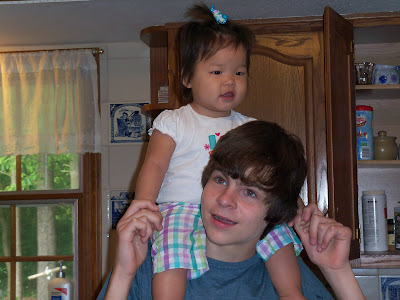 Fast forward to China. I was very nervous about bringing home the baby. I knew it would be a challenge to bond with her and deal with D at the same time. With adoption, you take some risk. But God had filled my heart with a need for her. So we pressed on.
She has been such an awesome blessing to us. I cannot even describe it in words. I thought she would bond with my 3rd born son the most. But guess who is her absolute favorite person? Why Zac! They have been almost inseparable from day one.
She even prefers him to everyone except me. And he adores her.
Now she is not a dog, of course. But the point is that God had a better plan than I. She has been an integral part of his healing. He has someone else to worry about. Someone else who has had a tough break in life and needs his care. He needs physical healing and she needs emotional healing.
I praise our great and good Creator. He knows the depth of every need. When he works in our lives, it is an awesome thing to behold.........
"Kank you. Kank you. Dadda." 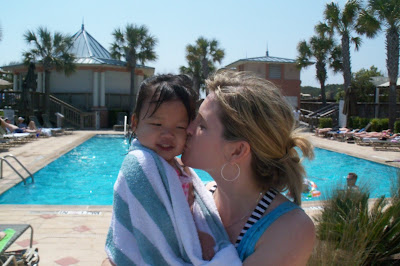 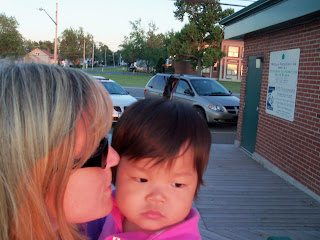 So we are officially on vacation. Ahhhh....the sunshine, the great food and great conversation with family: What could be better?

So far the trip has been pretty uneventful, Diabetes-wise. I was pretty nervous because the day before we left, I got really, REALLY sick. Fever, chills, stomach cramps and miserableness. I must admit that whenever we travel, I get a bit nervous. Diabetes makes it so much more complicated. You can get relaxed and BAM! All of a sudden you have some sort of problem.

But this trip has been good so far.


Shortly, after we arrived, I had a conversation with my 19 year old niece. She was diagnosed with Lymphoma at age 15 and suffered through a six month regimen of surgery, chemo and radiation treatments. She told me that she has been forever changed by the experience. She seems to be working through a lot of her feelings about her experience, still.


I tried to relate to her with Zac's diabetes, but could tell that she does not consider it to be comparable. I think I possibly insulted her by not seeming compassionate enough, even though I tried.


It just reminded me that there are so many different perspectives in this world. One thing I have always felt a little frustrated about was that if a child has cancer, people really feel compassionate. But diabetes really does not get the same level of compassion.


But rather than feeling frustrated about our conversation, I just wanted to show her that I care. Life is just too short. I am finished with seeking understanding from others.

I am choosing to seek TO UNDERSTAND instead.

Maybe it is being in my 40's. Maybe. I don't know. I am just done with judging and anger and frustration.


I am going to make a decision to put others first, even when they don't give me the understanding and acceptance or reaction I desire.

Every time you hear him using the bathroom in the middle of the night, you need to get up and ask if he has a pod error or keytones.


(last night he had simply fallen asleep in his clothes while doing homework late and woke up at 4:00 to brush his teeth and well.....go.)
Posted by Shannon at 4:01 AM 3 comments:

I realize that I created this blog for the purpose of sharing Diabetes related events. I thought it would be therapeutic to simply pen my frustrations and to connect with other parents who could relate.

But lately my heart just isn't in it. I have very little to say. The Diabetes is not even a focus for us.

Yesterday I was asking Zac some questions about an upcoming Drama camp he will attend. He and his siblings will be participating in a local acting seminar every day this week and then present a drama on Friday night. Zac has been cast in a large role. He has paragraph long monologues though out the play.

As a homeschooler, we rarely have need to alert anyone of his Diabetes. I was contemplating if and how we should tell the director and also asking Zac his strategy for keeping track of his supplies. He became a little annoyed with me and commented that it is no bigger a deal than the co-op he attends every Wednesday.

I'll admit that his attitude stung a little. He could tell and immediately apologized.

But I realize that he is right. He is quite capable. He has done this many times. I guess I felt a sense of responsibility to be involved more.

So on to the thought that originally inspired this post.


I do care that Zac has proper Diabetic care. But I am truly motivated, highly inspired by the idea of instilling character into my children. It takes precedence over all. I don't really care about grades. I care that they love learning and show integrity in how they complete assignments. I could care less if they are popular. I DO care that they treat others with kindness and show courage in defending the oppressed.

This past year, Zac became the "oldest" in our household, as his brother ( and best friend) left for college. Wow. He has stepped it up. He is amazing. He cleans the house, works hard at school and takes care of his little sister with a love I have never seen.

Parenting can be such LONG, tedious work. Some days I wonder if it is worth all the sacrifice. But, of course.....it is!

I have to ask myself.....how much time am I devoting to building their character above ALL else? And when I am discouraged because my two year old is testing the boundaries in public and otherwise exhausting me, I look at my older children. It IS making a difference. 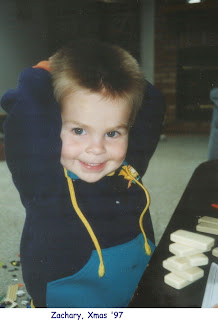 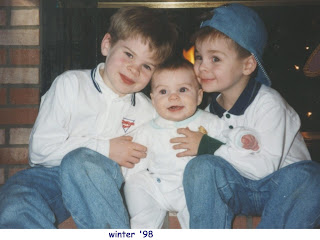 When you were little, I told you to stop growing... 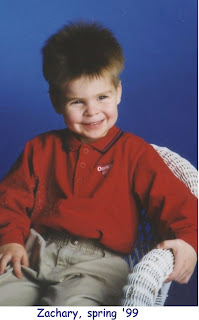 I guess I'd better warm up the car and get ready to teach you to drive!! Yahoo! 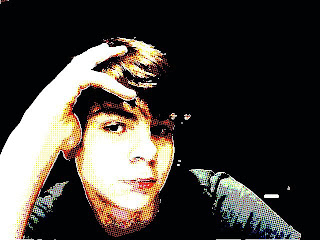 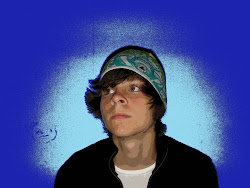 The day his pancreas went EMO

My Week in Video

Music Video made by Zac

Shannon
Wife of 20 years to Robert. Homeschooling mother to five children, one of whom has Juvenile Diabetes, ages 19, 16, 12, 10 and 24 months. Recently brought home our daughter from China. 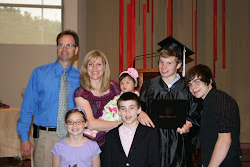 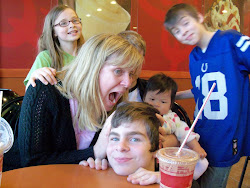 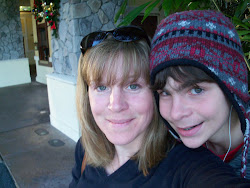 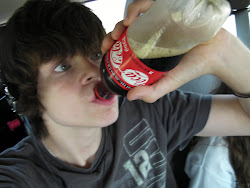